Check out this op-ed piece in Sunday's NY Times co-authored by David Blankenhorn and Jonathan Rauch, two people who have sharply disagreed about gay civil marriage in the past. Here is their proposed compromise:

Congress would bestow the status of federal civil unions on same-sex marriages and civil unions granted at the state level, thereby conferring upon them most or all of the federal benefits and rights of marriage. But there would be a condition: Washington would recognize only those unions licensed in states with robust religious-conscience exceptions, which provide that religious organizations need not recognize same-sex unions against their will. The federal government would also enact religious-conscience protections of its own. All of these changes would be enacted in the same bill.

What I like about this idea is that it makes a rigorous respect for religious freedom the condition for granting gays and lesbians their legal rights, so that the freedoms and protections of both groups are tied together. Furthermore, if there were significant gay support for such a proposal, it would undercut the religious right's claim that the sole political agenda of the majority of gays is to trash the rights of Christians. This is the lie that helped get Prop. 8 passed here in California. Wouldn't it be nice to put that lie to rest?
Posted by Misty Irons at 3:03 PM

Finding Jesus Christ: "I have come down from heaven" 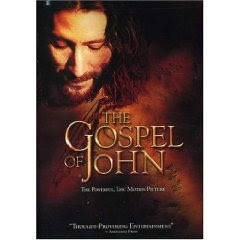 One sitting through the movie The Gospel of John should have made it obvious to you that Jesus continually exhorted his followers to believe that he was who he claimed to be. That wouldn't be such a big deal if it weren't that Jesus made so many radical claims about himself.

Now, any religious charlatan knows that when you're trying to gain a following, you should make claims that at least sound plausible. Say that you're a prophet, or a wise teacher. Say that you saw a vision, or that you once healed a man. Don't aim too high, and for heaven's sake make sure nothing that you say can be verified one way or another. You certainly don't go around claiming that you're the Son of God, that you came down from heaven, that your own flesh and blood are the true food and drink of the world, that you will resurrect all believers from their graves on the last day, and then back up your words by publicly healing people, raising the dead in broad daylight and finally raising yourself from the dead too. Yet according to John's gospel Jesus did all that. He wasn't exactly playing it safe, and neither was John by reporting these things.

If Jesus really was the Son of God who came down from heaven, it would all make sense. But what about this claim, and what did he mean by it? He didn't mean he dropped bodily out of the sky, did he? He wouldn't have gotten away with it anyhow, since a lot of the time he was talking to people from his home town with whom he grew up. You might recall one scene where Jesus was teaching a crowd at a lakeshore and a man stood atop a boulder and said, "This man is Jesus, son of Joseph isn't he? We know his father and mother. How then does he now say that he 'came down from heaven'?"

Point taken. What Jesus actually meant was that he existed in heaven before his birth as a human being. He existed the way God has always existed, which means he was claiming to be equal with God--which, by the way, is the same as claiming to be God. And yet he came down from heaven to take to himself a human body and a human soul, and to be born into this world as an infant through a regular human mother. In other words: the Christmas story. The Son of God became the son of man so that he could live among the creatures that he himself made.

The question is whether this claim is true.

How can you know? It's impossible to have absolute, scientific proof about whether someone really has come from heaven, mainly because you are on the earth. You've never been to heaven. You don't know what heavenliness is like. You can't travel up there to investigate, to interview the beings who live there. The one claiming to be from heaven can only come down and try to convince you. He will try to reason with your earth-bound mind, give modest displays of his heavenly abilities without freaking you out too much, and demonstrate that no earthly powers--not evil, not suffering, not even death--can defeat him.

If that much credibility can be established, then the rest--the part that is beyond your mind to comprehend--can be taken on faith. Not a blind, wishful-thinking, stab-in-the-dark type faith, but a faith that is the natural trajectory of what reason, love, morality, sanity, gut and need are already telling you about the one who is making this claim.

Whether such faith can be demanded of us is something I'll talk about next time.
Posted by Misty Irons at 9:43 AM

The voice of the other 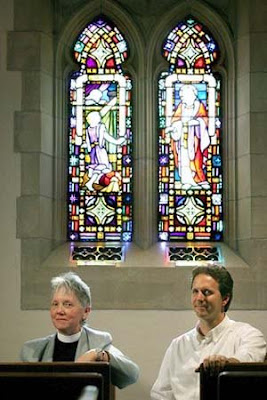 In case the Prop. 8 results have convinced you that all Mormons are anti-gay fundies, here's a story in today's L.A. Times showing how one Mormon filmmaker took the teachings of Jesus more seriously than the pressures of his church.

Finding Jesus Christ: What he claimed about himself

Now that you've watched The Gospel of John movie (see my recent post in this series), you've been exposed to the entire contents of the New Testament's Gospel of John word for word. I hope it was enlightening for you to hear the story about Jesus straight from the source. Just be aware that there are three other gospels in which other teachings and miracles of Jesus are recorded. We're going to stick with John for now because we've got to start somewhere.

At the very end of the movie we learn the reason why this story is called the Gospel of John. It is because one of the disciples, John, is the storyteller who claims to be giving an eyewitness report of Jesus' life on earth. (You may recall that he is guy the movie freeze-framed just before the credits rolled.)

So that's great. Another disciple of a charismatic leader makes fantastic claims about his leader's exploits, with the result that a lot of simple-minded, superstitious people buy into it and, behold, a religion is born!

Maybe. But I think what John reports about Jesus' teachings is utterly unique because of one important thing. According to John, Jesus' primary demand was that his followers believe in him, and believe the things he said about himself. That came across pretty clearly in the movie, didn't it? Jesus demanded that his followers believe that he came down from heaven. That is, that he preexisted his life as a human being. He also said that he was sent from heaven by God, whom he claimed was his Father. When you combine the sent-by-his-Father claim with the preexistence claim, you can only conclude that Jesus is claiming to be the Son of God with a capital "s."

In case you have doubts about whether you heard him right, you might also recall the scene where Jesus was teaching near the construction site. Workers were hanging off the scaffolding and handling loose stone. Jesus held up his hand amidst the crowd and said, "I am telling you the truth! Before Abraham was born . . . I am." People were enraged and sought to stone Jesus because he was quoting from a famous passage in the Old Testament, where God revealed himself to Moses as "I am." (Exodus 3:13-14) "I am" means "I am the one who simply exists. I never had a beginning and I won't have an end. I just am." It is a claim that can only be made by someone equal to God. That's why many of these devout Jews sought to kill Jesus for blasphemy.

These were the claims Jesus asked his followers to believe about himself. In doing so he made clear what kind of response he did not want. He did not want to be patronized. He did not want to go down in history as another mythological figure or patron saint about whom cute stories are told, so that people could say, "Well, who knows whether the stories are true, but that's beside the point! The point is that when I think of him I feel so much hope, so much love, so much inspiration!"

Jesus was not going to let people get away with that nonsense. He called them to a calm, sober belief in himself. And not an easy belief either. His followers had to believe that he was the revelation of God in human form, that his miracles testified to the truth of his identity, and that he not only raised others from the dead but in the end he raised himself. The challenge is the same for those who seek him today.
Posted by Misty Irons at 9:07 AM