And the latest followers willing to associate with this blog are...

Thanks guys!
Posted by Misty Irons at 7:58 PM

Email ThisBlogThis!Share to TwitterShare to FacebookShare to Pinterest
Labels: Followers

Don't mess with the geeks 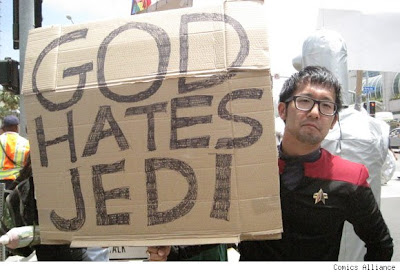 Fred Phelps and his Westboro Baptist Church crew finally met their match at yesterday's Comic-Con in San Diego, where geeks were ready to meet him in battle with their chanting and counter-protest signs.

Unbeknownst to the dastardly fanatics of the Westboro Baptist Church, the good folks of San Diego's Comic-Con were prepared for their arrival with their own special brand of superhuman counter protesting chanting "WHAT DO WE WANT" "GAY SEX" "WHEN DO WE WANT IT" "NOW!" while brandishing ironic (and some sincere) signs. Simply stated: The eclectic assembly of nerdom's finest stood and delivered.

A reader was kind enough to alert me to this notice by the Marin Foundation. Their four year research study is coming to a conclusion on August 1. So far they have over 2,000 participants, but it is not too late to add more. If you are LGBT and you haven't already done so, please consider participating in the study. You can do so anonymously. In the Marin Foundation's words, "It takes about 5 minutes to complete, and all we are looking for is the dead honest truth."

I'm not a part of the Marin Foundation but I have read Andrew Marin's book, Love Is An Orientation and I highly recommend it. He is one of the few straight evangelical Christians out there who really gets gay and lesbian issues. He has become a powerful advocate for building bridges between the Christian and gay communities and he takes plenty of heat for it. I don't know the details about the research project but I do know I'm excited about it. The impact that pseudo-scientific "research" has had on the church through the likes of Paul Cameron and Family Research Council has been tragic. I am hopeful that new, credible research can help to educate Christians in facts, not myths.
Posted by Misty Irons at 12:37 PM

I'm a straight person who supports Side B gay Christians who are trying to live celibate, but that doesn't necessarily mean I support the way some churches treat their celibate gay members. Evidently there are many straight Christians who, in the name of purity, feel obligated to view with suspicion every friendship a gay Christian might strike up in the church with another person of the same sex. And if said friendship appears to develop into anything meaningful, then that justifies confronting the gay celibate person of having crossed a line. Based on what some of my Side B gay friends tell me, it sounds like some straight Christians won't be satisfied until they see them utterly reduced to living emotionally and socially sterile lives for the remainder of their existence. For the sake of the kingdom, of course.

If it were a case of two gay men or two gay women always hanging out exclusively while claiming to be celibate, I agree that ought to raise suspicion. But if a gay man and a straight man become friends (or a gay woman and a straight woman), then obviously nothing is going to happen, particularly if all the cards are on the table about orientation issues. I repeat: no sex will happen. Yes, it's always possible the gay friend might cross an emotional line with his or her same sex straight friend, in which case it's up to the straight friend to say something. That's a risk those two people took when they struck up this friendship, and life is full of risks. But I don't think the risk of the gay person possibly having those feelings justifies putting him or her under immediate surveillance by the Purity Police every time they are seen hanging out with a friend of the same sex.

Living celibate is tough, whether it is a temporary calling or lifelong. Even if you're a married Christian, surely you remember what it was like when you were single and saving yourself for marriage. Imagine what it would be like if you were committed to abstinence for life. For gay celibate Christians that's hard enough to deal with without having everyone at church spying out your efforts to make the kind of meaningful friendships that will help to replace that one special relationship you'll always be denied.

Christian purity is not achieved through constant scoldings of "Don't do this!" and "Don't do that!" (For all you Bible students see Colossians 2:20-23.) Purity within the church family has as much to do with building solid, wholesome relationships as it does with not acting inappropriately. Singles within the church, whether gay or straight, need many more friendships and social outlets than married people. Instead of having the depth of an exclusive relationship, singles need the breadth of many relationships to focus their energies upon and satisfy their social and emotional needs. Without question, the celibate gay Christian needs more friendships and social ties in order to maintain the purity of their walk. They need to be socially fed, not starved.

Let's get creative. If you're not comfortable with your gay brothers and sisters in Christ making friends with people of the same sex, maybe churches should encourage opposite sex friendships. Gay women who seek to live celibate should be encouraged to form friendships with straight men, and gay men with straight women. Frankly about half of my friends are gay men, so from my experience it works out quite nicely. The one problem I see is that most straights in the church have been conditioned to avoid opposite-sex friendships and consequently aren't that good at cultivating them. That's obviously because for straights, friendship with the opposite sex normally means risk of sexual sin whereas friendships with the same sex equals safety. Therefore at churches men tend to congregate with men and women with women. We even encourage that division by separating men's Bible studies from women's Bible studies and men's discipleship groups from women's discipleship groups. Everything about the way we structure our churches' social activity encourages the greatest intimacy in same sex relationships, and those habits are hard to break.

Or maybe we can encourage our celibate gay members to form friendships with married couples. That might be an even better solution, if only we can learn to break out of our single and married group cliques. This can be a problem too. No single person really cares about the merits of breastfeeding or how the baby's nap schedule is going no matter how interested they may try to be. Married people will have to break out of their married-with-children world and talk about deeper things. They will have to make room in their lives for their single friends. Singles, in turn, must learn to accept their married friends' lack of free time and spontaneity.

All this to say that sometimes it's just natural for single men to hang out with other single men and single women with other single women. This is not a conspiracy. If a gay celibate man befriends a straight single guy, you shouldn't automatically assume the absolute worst about his motives. Who else is he going to hang with? If a gay celibate woman bonds with a straight female friend, it doesn't necessarily mean something inappropriate is going on. Just chill for a second and try to reflect a little. Gay people need friends too, don't they?
Posted by Misty Irons at 8:00 PM

Email ThisBlogThis!Share to TwitterShare to FacebookShare to Pinterest
Labels: Celibacy

The best Christian demonstration at a gay pride parade

I'm not a big fan of gay pride parades but, oh, how I would've loved to march with these guys. You'll be encouraged by this story. Two thumbs up for the Marin Foundation. You guys rock!
Posted by Misty Irons at 9:33 PM