Even before President Obama signed the repeal of Don't Ask, Don't Tell today, I've been hearing objections from conservatives that "now our straight servicemembers will have to shower with homosexuals." Like, the repeal of DADT means we're now going to usher in the new homosexual brigade and dump them naked on our straight men and women in the showers and make everyone too scared to undress in the lockers ever again.

Well, I've got news for you, people. The repeal of DADT means our servicemembers will have to shower with the exact same people they have already been showering with for the past year, or two years, or five years, or however long they've been in the service. In other words, they have already been showering with homosexuals. The only difference is that because DADT has been repealed, the threat of being kicked out of the military for having one's sexual orientation revealed relieves the gay serviceperson from the pressure of having to keep quiet about his or her identity. As a result, this may increase the likelihood that he or she would make their gay identity known to others. On the other hand, the gay individual might just choose to keep quiet about it, while enjoying greater peace of mind knowing that being outed won't bring dire consequences. Other than that, everything goes on as usual.

Email ThisBlogThis!Share to TwitterShare to FacebookShare to Pinterest
Labels: DADT 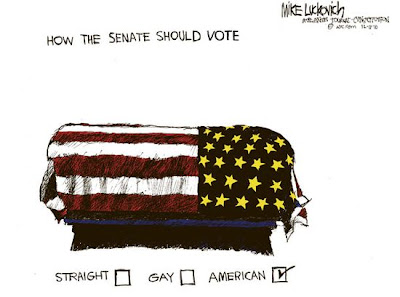 Brings tears to my eyes. President Obama promises to sign it into law next week.

Email ThisBlogThis!Share to TwitterShare to FacebookShare to Pinterest
Labels: DADT


Sorry for the light blogging lately. When the holidays are upon me, I feel like I've been hit by a tornado. I have no idea what's going to happen with the current attempt to repeal Don't Ask Don't Tell, but it's reminded me of one of my favorite Jon Stewart clips from last year (keep watching, he'll get to it at 3:14).
Posted by Misty Irons at 11:18 AM

John Shore thinks hatred of gays has to do with power, not sex. I'll leave it to a straight man to explain this one.
Posted by Misty Irons at 11:58 AM