Talking to my kids about the "h" word 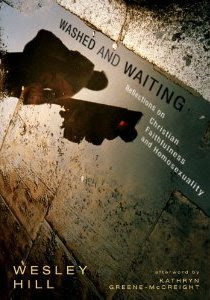 My friend Wesley Hill has written his first book, Washed and Waiting, which arrived fresh off the press and at my doorstep via UPS about ten days ago. I had the privilege of reviewing the manuscript when it was still in its early stages 2 1/2 years ago and am gratified to see it now in such elegant form, a short-and-sweet volume of 153 pages, containing reflections that are spiritual, personal and even poetic.
It probably isn't going to make most people happy, yet that's exactly why I think it needed to be written. Wesley writes an unapologetically Side B story of his own journey. By Side B I mean that he is gay, Christian and celibate. He does not offer an ex-gay testimony to satisfy straight evangelical conservatives, nor does he speak approvingly of his homosexuality to satisfy gay Christians who affirm same-sex relationships. This book was written for the benefit of those very few Christians who walk the narrow path that he walks, and offers them a sense of companionship on the way.
Woven into Wesley's own story is the inspiration he has found in the stories of two other highly respected Christian men, Henri Nouwen and Gerard Manley Hopkins, whose private struggles with homosexuality and with living celibate were little known during their lifetimes. There are no magic solutions offered here, no eureka moments that would enable one to coast the rest of the way through the pearly gates. If you view your homosexuality as sinful and you don't see any possibility of change, you know there are no pat answers to your situation. But what you will gain--what I hope you will gain if you are a Side B Christian--is encouragement from knowing you aren't alone, that others have walked this path before you and are walking it even now.
But this book has something to say to straight Christians too. These days there is a lot of arguing in the conservative church about how you can't be gay and Christian. People who talk this way have a certain definition of "gay" but they also have a certain definition of "Christian." In their eyes, anyone who believes that the Bible does not condemn same-sex relationships is a liberal whose faith doesn't have to be taken seriously. That's a debate for another day. But with Wesley's book you don't have to read too far before you realize that he not only holds to a very conservative position on homosexuality, but his theological knowledge and breadth of Scriptural understanding far surpasses the average pew-sitter. This isn't someone you can dismiss as a "liberal." Even the title, Washed and Waiting, is a profound theological expression of how he views his current status: one who is already justified (washed), but is not yet glorified (waiting). If only more of us would have to humility to embrace the status of "washed and waiting," instead of viewing ourselves as "having arrived and waiting for others to catch up."
And so what also interests me about the book is how it speaks indirectly to the straight conservative Christian who may be skeptical about whether someone really could be gay and Christian. And beyond that it also addresses straight Christians who may have gotten as far as accepting the "gay Christian" label but might be tempted to view celibacy as a simple, one-size-fits-all solution for everyone. Wesley shows that he has embraced the call to celibacy but that walking the path is hardly simple. He tells stories about all the straight Christian friends he has had to lean on for support and speaks of the church as his spiritual family he needs to fill the void of loneliness. He draws upon a deep Christocentric theology of patience, suffering and sanctification to sustain hope through his personal struggles. As a straight Christian reader you wonder again and again, "Could I do this? Could I walk in Wesley's shoes?" and, "Maybe I could support someone who feels called to this, but could I demand such a thing of my brothers and sisters in Christ?"
Wesley decided to write this book because as a gay, celibate Christian he could find nothing on the bookshelves that spoke to his need for wisdom, encouragement and spiritual reflection in the midst of his raw struggle. I know a lot of you out there have been looking for a book like this as well. I hope that you will take away from this volume not only Wesley's insights, but wisdom from Nouwen, Hopkins, and the many other voices that are woven together here in a grand conversation about suffering, sanctification, longing and hope.
Posted by Misty Irons at 9:27 AM Links to this post