Book Review: "Out of a Far Country" 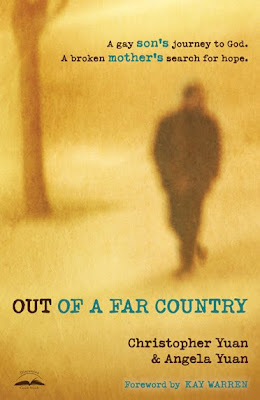 Christopher Yuan emailed me over the summer, asking if I would be willing to review the book he and his mother, Angela Yuan, co-authored called Out of a Far Country. Some months earlier I had seen a video clip of Christopher and Angela discussing the book, and then it happened that a staff member at my church stopped me one Sunday to ask if I had read it. So awareness of the book was already hovering at the edge of my consciousness.

I told Christopher that I'd be glad to review the book, but because of my son's surgery it would take some time before I could get going on it. After a couple more email exchanges it wasn't long before he had the publisher send me a copy of the book gratis. I guess I'm a novice in the business of book reviewing because I was fully expecting that if I promised an author I would review his book, I should be glad to go out and buy a copy of it myself, because a promise is a promise. And besides, I wouldn't want to be accused of giving a biased review because I got a free book out of it. So, wrapping up this statement of full disclosure, I just thought y'all should know that those are the circumstances under which I am writing this review, and you can decide for yourself whether I'm being biased or not.

Out of a Far Country is a story told by both mother and son about how they were once both spiritually lost and headed in separate directions. Christopher's coming out as gay is what caused Angela to embark on a spiritual journey that would lead her, and eventually Christopher, to return like prodigals back to their heavenly Father. Christopher and Angela tell their stories in alternating chapters, giving their differing perspectives on the same events, yet showing how God worked over a period of eight years to bring their once widely divergent paths to merge together into one by his grace.

It was a fast read, the story never dragged and contained plenty of fascinating elements. It wasn't until I was finished that I began to wonder whether this book was really about homosexuality at all. It could have been the story of any rebellious child, and of any mother's ache to see a son or daughter find peace with God and within themselves. So I read it a second time and confirmed that the strongest connection I made with the book was as a parent, not so much with the gay issue. It seemed to me Christopher's rebellion wasn't so much about being gay as it was about the feelings of rejection that led him into drug addiction and some of the darker aspects of '90's gay society. Yet the main drama centered around Angela's quest to find healing and hope in Christ, to resurrect her dying marriage, and to mend her broken relationship with her son while pointing him to the way of true inner peace.

I worried that the story would be about Angela's attempt to make her son ex-gay, but it wasn't about that. Even though she pursued that path at first, it became apparent as the story unfolded that she was slowly learning to surrender her son entirely to God and allow him to carry out his own plan, not hers, in her son's life. And even though Christopher's story of rebellion appears to play right into the hands of the evangelical stereotype of the "gay lifestyle," his post-conversion reflections about the need to live in "holy sexuality" as a follower of Christ who is still gay would definitely be off-message in many conservative Christian circles. He spends only about four and a half pages explaining how he came to the Side B position, coming off as neither dogmatic nor resentful, but rather as someone who fully and willingly embraces it.

I didn't care for the study guide questions at the end. I'd rather not have each chapter presented to me as an object lesson when it is really the broader strokes of the story that display the mysteries of how God works in our lives. How he raises life out of ashes and dust, how surrendering everything to him is the only way to true happiness, how hope is never truly dead when you seek the one who holds all things in his hands. I can't tell you if the message of Out of a Far Country is more for straights or gays, but its message is definitely Christian.
Posted by Misty Irons at 2:34 PM