Thoughts on Obama and DOMA

Most of the reaction to the Obama administration's refusal to defend DOMA has been tepid. It's certainly not an announcement that will lead to the immediate legalization of gay marriage in all fifty states. And sure, someone else can always step in and do the job of defending DOMA in court. Yet to me Wednesday's announcement by President Obama and the Attorney General is significant not so much legally, but symbolically. In my bones I feel the impact of it, and I'm struggling to put into words what I sense is a shift in the moral tide of this country.

Last summer I spent countless hours going over Judge Walker's Prop. 8 ruling so I could blog out a summary of it here. That study impressed upon me how difficult it is to defend the position that homosexual couples should be treated differently than heterosexual couples without sounding like some kind of bigoted, backwater, religious nutcase. Think about it. In order to defend such a position, someone has to take the witness stand and explain from the perspective of hard facts and scientific research that gay couples are less stable, less worthy, and less valuable to society than straight couples. You'd have to show that gay couples make worse parents, threaten the fabric of society, endanger religious freedom, or corrupt the nation's youth. This is not a political rant on a street corner, or a Sunday sermon that quotes a few ripped-out-of-context Bible verses. This is court testimony by an expert witness who must deliver a convincing objective account of the facts of the case, who must stand up to the cross-examination that follows.

Governor Schwarzenegger and the California Attorney General refused defend such a position, and you can understand why. So instead the people who ran the pro-Prop. 8 campaign volunteered to defend it, and look what happened. Four of their expert witnesses were no-shows. Of the remaining two witnesses, one did not have the credentials to be an expert witness and his testimony was deemed unreliable, while the other qualified as an expert witness but gave testimony that was largely irrelevant to the case. Reading between the lines, my guess is that the proponents had so much trouble getting their case together because no self-respecting sociologist, psychologist, historian or university professor who cares about their career and reputation wants to publicly defend the position that gays and lesbians are inferior human beings.

The California Attorney General would later admit reluctantly, when pressed, that he thought Prop. 8 was unconstitutional. I got the impression that he and Governor Schwarzenegger were trying to slip out of having to publicly make that admission, or they were at least trying to be as low-key about it as possible. But this past Wednesday President Obama and Attorney General Eric Holder come out with a formal announcement that they will not defend DOMA. They were not being shy about it. What's more they put their finger directly on the heart of the issue, which is that "classifications based on sexual orientation warrant heightened scrutiny." In other words they don't think it's right to argue for discrimination based on sexual orientation. Just as Schwarzenegger couldn't stomach it, neither can Obama, except Obama calls a press conference to say it. And he's the President.

I can't help but think that President Obama's announcement is somehow, either directly or indirectly, a consequence of what happened with the Prop. 8 ruling. Even if someone else wants to step up and defend DOMA, how do you avoid a repeat of the pro-Prop. 8 case? Where will you get your witnesses? How will you argue the case? What will this do to people's professional or political credibility? I think the Obama administration must have realized all this and now they don't want anything to with the case. And if that realization has hit the highest level of our government, then that is significant indeed. It should only be a matter of time before the repercussions pervade throughout the moral fabric of this country in the coming decade.
Posted by Misty Irons at 9:20 AM

No defense for the Defense of Marriage Act

The big news today is that President Obama announced that his administration will no longer oppose legal challenges to the Defense of Marriage Act (DOMA), a law that bars the federal government from recognizing same-sex marriages or extending to them the same benefits that heterosexual married couples receive.

Here is the letter to Congress from Attorney General Eric H. Holder, Jr. The legalese may be difficult, but if you were following my blogging on the Prop. 8 ruling last year, you should be able to understand the basic flow of thought. For review, read the introductory section of this post to refresh yourself on some of the terms.
Posted by Misty Irons at 9:54 PM 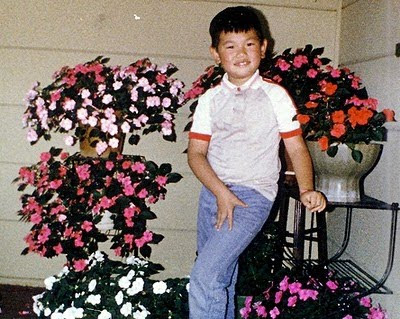 I can't stop looking at this blog. The "Born This Way" blog features childhood photos submitted by readers that reveal something about their LGBT identity, some at a very young age.

As a parent I have observed the extent to which all three of my kids came "prepackaged." The 13 year-old who doesn't like to express her feelings was once an eighteen-month-old who used to hold in silent tears whenever she fell and scraped her knee. The ten-year-old who folds her own clothes without being told and has all her stuffed animals organized at the foot of her bed was the one who already knew how to dress herself in color-coordinated outfits at age two. (As for my four-year-old who owns a hundred toy cars and trucks, trails dirt into the house, knocks holes in our dry wall, and gives me the big-brown-puppy-eyes-look when he knows he's in trouble--I can only imagine what ten years will bring.)

All this to say: the idea that sexuality comes with the package when a child enters the world has never been a difficult concept for me to grasp. Yet still I find myself surprised and fascinated by these photos and the short essays that accompany them. While I know that not all gay men and women fit the stereotypes, it's apparent that many who do fit them more closely expressed themselves early on.
Posted by Misty Irons at 1:49 PM

One reason I blog?

Because I don't want to be embarrassed in front of my grandkids. The Onion issues this warning.
Posted by Misty Irons at 8:42 AM