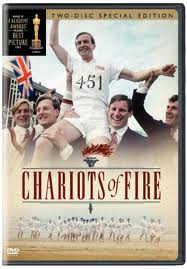 I recently realized that the movie Chariots of Fire, which I watched for about the fifth time last weekend, would have completely failed if it weren't for the brilliant acting of Ian Charleson who played Eric Liddell. That may seem obvious: Eric Liddell's character is the inspiration of the movie. He's the Christian missionary who ran for God's pleasure, who risked throwing away three years of training and a chance for Olympic gold because he felt he could not run an Olympic heat on the Christian Sabbath.

People think it's the story itself that captivates us, but I think it is Charleson's performance that sells it. His job as an actor was not just to play a good man but a saintly man, pious yet likable, reserved but not dull, conflicted yet steadfast, vulnerable enough to draw our sympathy yet strong enough to stand entirely alone. Then he had to make it look so natural the audience would be tempted to think this guy Ian Charleson must just be playing himself; yet I can't think of a more difficult acting role. One misstep and the whole thing is ruined: we're left with a story about a self-righteous prig who's determined to put the hopes of an entire nation on hold because of his personal fanaticism. The difference between that disaster and the Academy Award winning picture we got is Ian Charleson's ability to hit exactly the right note.

I got curious about the man who was able to pull off this subtle, multi-layered, highly spiritual performance. I thought, "I really like this Charleson guy. I'll bet he's either Christian or gay." I googled, then wikipedia-ed. Charleson was gay. And reading between the lines he was probably also Christian, judging from how eager he was to play the part of Eric Liddell, saying the role would "fit like a kid glove." He studied the Bible intensively to prepare for the role and wrote the post-race speech Eric Liddell delivered to the working class crowd himself. Charleson died of AIDS in 1990. He was 40.

It was all news to me. Maybe ten years ago such a discovery would have shocked and disgusted me, but now I find it makes sense, and I even guessed beforehand that maybe a gay man pulled off this remarkable performance. But why did I have that hunch? So many times when I encounter a song, a performance, or a piece of art that strikes me as so true and subtle and poignant and uplifting I feel almost a spiritual connection with it, I later learn the artist behind it is gay. It's happened so often I now take it for granted. Maybe there's something about being gay that enables an artist to see more clearly what it means to be human, to identify certain truths about us all. Maybe it is the ones who are forced to the margins who truly understand what it is we all have in common.

Now that I know Ian Charleson was gay it occurs to me that the dimension he grasped about Eric Liddell, which made that character seem so authentic, was his loneliness. To run for the pleasure of God had to be a lonely calling, one that neither your coach nor your missionary sister could easily understand. It's too religious for the athletic world and too secular for the Christian world. The Eric Liddell that Charleson portrayed was a man caught in between, and while both worlds sought to foist their own agendas upon him, he insisted on marching to a tune that he alone could hear, indulging in a private joy which, though mixed with pain, enabled him to carry himself with dignity throughout the chaos. Who else but a gay actor could understand so intuitively how these complex elements fit seamlessly together: to stand seemingly on center stage and still feel like an outsider looking in, to navigate through so many apparent contradictions and other people's attempts to define you, to drop an anchor deep within yourself and stay centered upon it with a conviction that reaches near spiritual heights?
Posted by Misty Irons at 10:30 PM