The (In)Famous SMT has done the service of providing us with an inside look at his "gay lifestyle." Pastors and preachers who regularly condemn such lifestyles from the pulpit would do well to pay attention in this rare moment of disclosure:

Shocking, I know.
Posted by Misty Irons at 3:07 PM

Beyond the silence, continued

My previous post "Beyond the Silence" seems to have struck a chord with a lot of you. So let me add a few more thoughts on how straights should go about "continuing the conversation" with a gay friend or family member who comes out to you.

One thing I have found to be true for myself, and for many straights who think seriously about gay issues, is that it's perfectly natural for your thoughts to be constantly evolving. Once you learn to tune in to the debate, you become aware of how many different angles and perspectives are being discussed all the time: gay marriage, gays in the military, hate crimes laws, the teaching of the Bible, the attitudes of the church, coming out stories, ex-gay ministries, and so forth. For the thoughtful person, these debates have a way of injecting small insights into your brain bit by bit so that you are constantly adjusting your attitude toward homosexuality. You confront contradictions in your thinking. You make connections. You have mini "aha!" moments that hit you at odd times of the day.

So if your friend or family member has already come out to you as gay and if, at the time, in your panic, you were only able to produce some half-audible, highly dissatisfying mumble, don't let that response stand as a Monument For All Time representing your attitude toward homosexuality. You were taken off guard. You had a brain freeze. You hadn't had a chance to get out of the starting blocks in this journey. But now you're off, slowly jogging along, taking in the sights.

Now that you've had a chance to recover and think a little, you can let that gay friend or family member know that the gears of your mind are turning upstairs. Just because you botched it when they first came out to you doesn't mean you can't recover. In fact, you should just take for granted that most people botch it--and that's forgivable--but now you're on your feet ready to think coherent thoughts. They don't have to be profound. This is bit by bit, remember?

Probably the safest way of bringing up "the topic" is to talk about some article you read or something you saw on TV. Nowadays there is no shortage of news stories, human interest stories, editorials, political debates, interviews, court cases or comedy sketches on gay-related topics. "The other day I saw an interview of this guy who got kicked out of the military just because he's gay. That sucks, man." That's a conversation you can have with a gay friend in the car while driving to 7-Eleven to grab some beer. Or drop them an email. "Hey, man. Long time no talk. I saw this today and was wondering what you think. (Cut and paste link to article or YouTube on gay-related subject.)"

It's pretty difficult for someone who is gay to bring this stuff up with you. They don't want you to accuse them of being "pushy," or of coming off like an "activist." It's better when you take the initiative. Even if you never end up having a deep conversation, the little gestures do make a difference in a relationship. And if you're a Christian, there's no better way to let that person know that the love you claim to have for them in Christ is genuine.
Posted by Misty Irons at 8:25 AM

Email ThisBlogThis!Share to TwitterShare to FacebookShare to Pinterest
Labels: Coming out, Reaching out 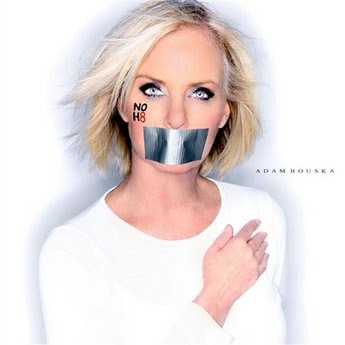 Cindy McCain comes out publicly against Prop. 8., posing for a NOH8 ad. She follows the lead of her daughter, Meghan McCain, who posed for a NOH8 ad before. Meanwhile, Republican attorney Ted Olson continues to challenge Prop. 8 at a federal court in San Francisco . . .

What's the Republican party coming to? For some, maybe it's a realization that they want to be on the right side of the issue when history looks back and recognizes this as a civil rights struggle.
Posted by Misty Irons at 9:21 PM

Pat opened his trap again, and it's not good

According to Pat Robertson, the Haitians are "cursed" because they once "swore a pact to the devil" to gain their freedom from the French.

So in the mind of Pat Robertson and his generation of culture warrior Christians, this is what it means to show "compassion" in the face of tragedy? Can anything he says be taken as a true Christian perspective anymore?

Which reminds me. Don't forget to sign the petition "Christians Against Pat Speaking." The link is always available in my sidebar.

Update: The devil responds.
Posted by Misty Irons at 10:38 AM

Attorney Ted Olson, renown champion of conservative and Republican causes, is currently involved in persuading a federal court to invalidate Proposition 8, a voter-approved measure that overturned the constitutional right of same-sex couples to marry in California in 2008. His article, "The Conservative Case for Gay Marriage," appears in Newsweek today.

Reactions to our lawsuit have reinforced for me these essential truths. I have certainly heard anger, resentment, and hostility, and words like "betrayal" and other pointedly graphic criticism. But mostly I have been overwhelmed by expressions of gratitude and good will from persons in all walks of life, including, I might add, from many conservatives and libertarians whose names might surprise. I have been particularly moved by many personal renditions of how lonely and personally destructive it is to be treated as an outcast and how meaningful it will be to be respected by our laws and civil institutions as an American, entitled to equality and dignity. I have no doubt that we are on the right side of this battle, the right side of the law, and the right side of history.

In 1996 Andrew Sullivan made the first conservative case for civil same-sex marriage in his book Virtually Normal. After reading his arguments in 2000 I became persuaded that I could make a conservative Christian case for civil same-sex marriage, aimed at Christians who might think homosexual practice is sinful but weren't interested in hindering the freedoms of those who would disagree. Evidently my essay was only one example of how Sullivan's ideas were spreading. Now, six years after I was forced out of my old denomination for expressing my views, Olson's article appears in today's Newsweek. The snowball has long been gathering speed and momentum. Given enough time, justice and truth will eventually win out.
Posted by Misty Irons at 12:41 PM

It's time to recognize a new batch of followers. We've now hit the 45 mark. Thanks for joining, you guys!

Email ThisBlogThis!Share to TwitterShare to FacebookShare to Pinterest
Labels: Followers

I've noticed how the younger generation of evangelicals seems to have taken to heart the damage that the culture war has done to our Christian witness in this country. Movements like the emerging church, the "red letter Christians," and the popularity of pacifist politics show that young evangelicals are seeking to make a break from the past and strike out in new, even controversial, directions. I even see this generation of Christians making a concerted effort not to come off as hostile toward gays and lesbians, nuancing their opinions about homosexuality and steering clear of anything that smacks of homophobia.

The problem I hear about now, especially from young gays who attend evangelical churches or Christian colleges, is not that fellow Christians are hostile toward them, but rather they treat their homosexuality with silence. Complete deathly silence. No one says a word. One reader told me, "I came out to my brother a year ago but he hasn't mentioned it to me since. It's almost like I never came out to him at all."

I wonder if many straight Christians are so afraid of saying the wrong thing they've become utterly paralyzed. Silence is certainly better than screaming "pervert!" at somebody and calling up his pastor to get him excommunicated. But when a gay friend or family member comes out to you, he or she is signaling that they want the silence to be broken. They want the door of conversation to be open from now on. It doesn't have to be a daily topic of discussion, but it should lead to something, and you need to keep in mind that anyone who comes out to you is purposely making him- or herself vulnerable to whatever your response might be. That takes guts. Giving no response at all, ever, is a terrible way to react.

Possibly the best response you can give, if it's an honest one, is: "This doesn't change anything about our friendship as far as I'm concerned," or, "I love you just the same." If you can't say anything quite that positive, you should say something that's both honest and decent: "This has really thrown me for a loop. Is it alright if I get back to you after I've collected my thoughts?" And then make sure you get back to them. If someone was brave enough to come out to you, you should at least try to be brave enough to follow up as promised.

So what is a "safe" way to advance the discussion? Here are some suggestions:

* When did you first realize you were gay? (I just want to listen and understand where you're coming from.)

* How has going to church been for you lately? (I'm wondering if you still feel safe and comfortable there.)